Half of North Carolinians consider themselves to be pro-life, while only 40 percent of respondents identify as pro-choice, according to the March 2019 Civitas Poll. Recent national events have again catapulted abortion regulations to the forefront of state policy debates across the country. North Carolina is no exception. Civitas Communications Director Brooke Medina said it well:

“In the wake of horrific anti-life legislation pushed in the New York and Virginia legislatures in recent months, it is reassuring to see a significant number of North Carolinians identify as pro-life. It should serve as a clear message to politicians that radical abortion legislation is out of step with half of their electorate.”

Just this week, North Carolina’s ban on abortions after 20 weeks was overturned by a federal judge. Despite the outcome, , several states have passed or are considering heartbeat legislation that bans abortions once a baby’s heartbeat can be detected in the womb.

As the policy debates rage on across the country, North Carolinians seem to largely be divided on the issue as well. When asked to identify as pro-life or pro-choice, ten percent of North Carolinians were undecided.

The topline results alone fail to tell the full story. Digging into the survey responses reveals some interesting trends.

Men tend to be slightly more pro-life than women, although the two-point difference is well within the poll’s 4.38-point margin of error.

Perhaps unsurprisingly, Republicans overwhelmingly identify as pro-life, with a margin of 81 to 15. Democrats tend to be pro-choice, although by a slightly smaller margin of 67 to 24. Unaffiliated voters, who make up the state’s second largest voting bloc (behind Democrats), are net pro-life by a 14-point margin of 48 to 34.

All media markets within the state were more pro-life than pro-choice. However, two in particular had huge pro-life advantages: Wilmington and the Triad (Greensboro-High Point-Winston Salem).

Although the terms “pro-life” and “pro-choice” are relatively common in the discussion of abortion policy, they can mean different things to different people. As a follow up to that question, the Civitas Poll also asked people their opinion on when abortions should be allowed.

These responses reveal a new meaning when you look at how people’s answer to the first question influences their answer to the second.

Clearly, pro-life and pro-choice are not universally defined concepts. However, abortion continues to be an issue for which people tend to have strong – if nuanced – opinions. This ambiguity can make it difficult to discern people’s abortion policy preferences. Everyone may draw their version of the “line in the sand” slightly differently.

The March Civitas Poll also asked respondents their opinion about House Bill 28. Recently filed in the North Carolina legislature, HB28 would limit abortions performed after 13 weeks to only cases of a medical emergency.

The response to this question seems to have a similar breakdown of the pro-life/choice question. However, a look at the crosstabs reveals that support or opposition did not fall neatly along those lines. 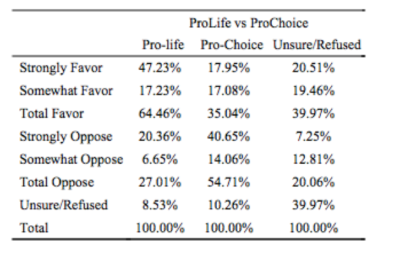 Twenty-seven percent of those who identify as pro-life say that they do not support the ban after 13 weeks. However, if you recall, less than 10 percent of that same group thought abortion should be allowed without an extenuating circumstance. So, why would 27 percent oppose the bill? It could be that they do not think it goes far enough to protect unborn children. We cannot definitively know the motivations of the respondents. However, the data suggests that most North Carolinians would probably disagree with the recent federal court ruling that overturned the state’s ban on abortions after 20 weeks.

As North Carolina grapples with the ramifications of the ruling, the future of abortion policy in the state is uncertain. “Pro-life” and “pro-choice” remain hazy concepts, and elected officials may face difficulty gauging or aligning with the will of their constituents.  Abortion is setting up as a defining topic of the upcoming 2020 election. As Civitas President Donald Bryson pointed out, “The issue of abortion is alive and well in North Carolina politics.”

To learn more about North Carolina’s stance on abortion, explore the interactive infographic below and check out the full Civitas Poll here. Note: Per industry standard, the poll crosstabs are weighted to reflect the demographic makeup of the North Carolina electorate. The infographic below was generated using raw, unweighted survey result data. Minor divergences may result.