SOPA and PIPA were about intellectual property, and allowed courts to remove DNS listings for any website hosting pirated content. CISPA is meanwhile about security, and makes it possible for companies to share user information with the U.S. government (and vice versa) if the parties believe it is needed for the greater cyber security good.

As with many bills, CISPA has room for abuse. It “means a company like Google, Facebook, Twitter, or AT&T could intercept your emails and text messages, send copies to one another and to the government, and modify those communications or prevent them from reaching their destination if it fits into their plan to stop ‘cybersecurity’ threats,” an EFF spokesperson said in a statement. “Worst of all, the stated definition of ‘cybersecurity purpose’ is so broad that it leaves the door open to censor any speech that a company believes would ‘degrade the network.’”

That’s the main point, but CISPA also includes portions about protecting intellectual property, reminding many of SOPA and PIPA. If an IP thief is considered a threat to cyber security, then his website, or where he posted the content, could technically be blocked by CISPA. If a government agency believed you were planning a cyber attack, and were discussing it on Facebook, it could ask the social networking giant for every piece of information about you. 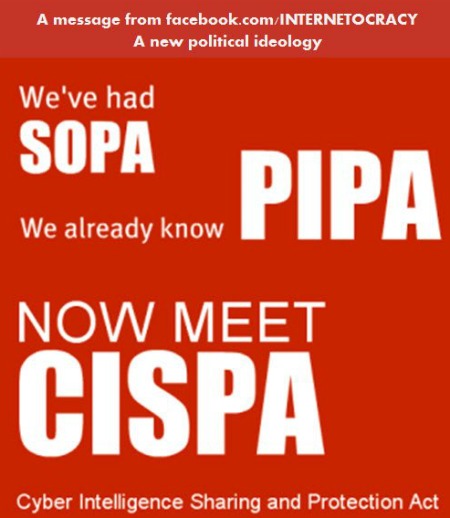 Facebook could, of course, say no. That’s important to emphasize. The bill would not force Facebook to hand over all the data it normally does when it legally has to (Here’s what Facebook sends the cops in response to a subpoena).

“Parts of the proposed legislation specifically state that cybersecurity purpose includes protecting against the ‘theft or misappropriation of private or government information’ including ‘intellectual property,’” an EFF spokesperson said in a statement. “Such sweeping language would give companies and the government new powers to monitor and censor communications for copyright infringement. It could also be a powerful weapon to use against whistleblower websites like WikiLeaks.”

CISPA currently has over 100 co-sponsors in Congress and 28 corporate supporters (full list), one of which is Facebook. I asked Facebook for a statement regarding its support, but the company declined to comment on this article. Instead, a spokesperson pointed me to Facebook’s letter about the bill (PDF).

Additional reading for the curious: The Coming Age of Internetocracy: “Internetocracy is a new political movement whose mission is to empower each citizen to directly table and decide legislation by enabling them through social networking, personal broadcasting, and other internet technologies.”
(NC TEA Party is not endorsing this movement.)