You probably have not heard a lot about the bill that just passed in the North Carolina House (HB 1726) , unless you have been following the #NCGA hashtag on twitter, or happen to be following NC Senate Candidate Nathan Jones, who mentioned it a few days ago.  Basically, North Carolina lawmakers believe it is not enough for the Federal Government to pass health insurance mandates, but they also want to dictate what YOUR CHILD DRINKS in daycare. Private daycare. That’s right!

These mandates would apply to every child in child care, without regard to each child’s health or nutritional needs, and without regard to parental wishes.   These requirements go well beyond current minimum nutrition standards for day care centers.  HB 1726 will be up for a final vote in the House Monday night and then must be considered by the Senate.” *

Comments supporting this bill are “you should not be not have to worry that your daycare provider is feeding your children junk”, to which I would say, at least in Forsyth County, daycare centers are already required to post a menu a month in advance of what they will be feeding the children. So you already do not have to worry, because you have been informed in advance, and if you don’t want your children to have what is served that day, you can send lunch with them.

I guess that is too simple for lawmakers, isn’t it? I realize that their concern is childhood obesity, but there are other ways to tackle this problem. What are your thoughts?

We are now in the third of the never-ending saga of “The Hole.”  The BP well refuses to be conquered by manpower or technology.  America needs help with this and no less than thirteen foreign countries offered us their technological help and experience with the leak in the Gulf.  They wanted to safeguard our shores and help stop the damage and it source.  And Obama turned all of them down.  Remember when our last President “went it alone” in terms of foreign policy and everyone, including the junior senator from Illinois could not fathom why?  Where is Obama’s spirit of international cooperation now?

I think I know where it is: It’s in the crisis that Rahm Emanuel told us was coming.  This leak is the perfect “crisis” opportunity for them to do things that they believed that they couldn’t.  The Administration can hold us hostage, claiming that they are powerless to stop this menace.  What we’ll need is a tax increase to help cover the costs of all the damage.  “But, do you know what would really help?” they will ask. Without waiting to hear from us – you know, We the People – they will have a two-prong “battle plan.”  (Don’t you love how liberals absolutely love military terminology to push their ideas, but can’t stand the military?)   First, we need more regulation, because we all know that more rules make us all just that much safer… and keep government bloated on more tax money.  But what we’ll really need is “cap-and-trade” to help us reform our need to control our energy cravings.  That will solve everything, right?

In a land where we are losing more jobs and running out of money, a new “skyrocketing” energy tax is just what we need and so is another program to gobble up tax money that we don’t have.  But that is what Obama does best: Set a goal and worry about the details later because the plan will work itself out through sheer force of will.  It will be because he has deemed it so.  Well, I hope the President will soon realize that the real world doesn’t work that way.  People have to work and money has to be made in order to fund your visions, no matter how nightmarish I and several other like-minded people find them.  Your tax money comes from taxpayers and their work.  The IRS tax fairy doesn’t just leave a package marked “U.S. Government” on the steps of the Treasury.  And no jobs equal no tax money.  But I already see your reaction: Then you just raise the existing tax rate, which will only wreak more economic havoc upon us all.

President Obama, stop with the hostage stuff.  This whole affair is making you look weak.  You called General McChrystal back to Washington from the battlefront and essentially fire him because you felt like he had insulted you.  But at least there you looked almost decisive. 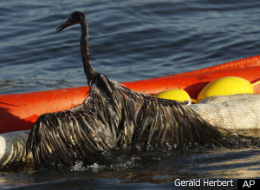 And you have been busy since Day One of the current “crisis.”  You made time hear the Jonas Brothers and Paul McCartney perform.  You could meet with Governor Jan Brewer of Arizona and then direct the Attorney General to sue Arizona for doing the job you won’t do on the border.  Time was made for meeting with the men’s basketball team from Duke University and even to play golf.  But, like the hostage situation from the Carter Administration, the number of days we are involved in this “crisis” keeps going up and there is no end in sight.

Going down there and looking angry and pensive for photo ops is not leadership; it’s playing politics with people’s livelihoods and with the health of the entire Gulf region.  For that matter, it’s you playing President and not being President.  And roughing up the executives at BP more than fifty days into this “crisis” is not leadership, either; it’s a pathetic attempt to shift the blame to someone else… again.  You were elected President, regardless of the thinnest resume ever presented as “qualifications”, so now it’s time to go do the job.  Otherwise, this complete failure will be your enduring legacy and you won’t be able to blame it on George W. Bush.  This ineptitude is all yours.

Thomas is currently pursuing a master’s degree in criminal justice. He considers himself very conservative (with a Libertarian streak). Thomas admits he has always been older than his chronological age.

A number of people have asked about  a recent email that apparently went out to a number of tea party supporters over the weekend. The unsubscribe link led you to what appears to be a list for the “Winston Salem Tea Party”. That email did not come from our organization. We have researched for hours to find the source of this “list”, and have come up empty at the time of this posting. There is not even an organization that exists (that can be found, anyway!) by the name of “Winston Salem Tea Party”.

Here are the facts:

Thank you for reading!

Go to You Cut to cast your vote for this weeks spending cut suggestion for the House.  This is an awesome opportunity to make your voice heard. Which one will you be voting for?

Previous Cuts Chosen By the Public

Each week, the public votes on which items should be brough to the House Floor. Here is a list of previous winning items.

Following a rebellion by two important factions of rank-and-file House Democrats, Speaker Nancy Pelosi (D-Calif.) has pulled a campaign-finance bill opposed by a broad coalition of special interest groups, including the U.S. Chamber of Commerce.

Pelosi and other Democratic leaders had scheduled a Friday vote on the DISCLOSE Act, a bill requiring special-interest groups to disclose their top donors if they choose to run TV ads or send out mass mailings in the final months of an election. The legislation is designed to roll back the controversial Supreme Court decision in the Citizens United case, which overturned restrictions on corporate campaign activities.

But after complaints from the conservative Blue Dogs and the Congressional Black Caucus, Pelosi was forced to pull the bill on Thursday night.

Pelosi’s office declined to comment on Thursday evening’s decision to pull the bill from the floor.

Mr. Tough Guy goes after a couple kids. This dude is a US Representative, I would love to see him try this with someone his own size, or maybe a Tea Partier. He would smiling out his bottom!

And we are the violent ones?

Click the title to watch the video. We will put the entire thing up once we get it produced.

The raging goon, Governor Spencer, slugged Nathan Tabor, a business owner and head of the Forsyth County Republican Party and a former candidate for senator.

But, that’s not all…

Governor Spencer is a union organizer, a socialist and a black liberation activist.
Spencer led the Greensboro K-Mart protests of 1995 and mobilized families, communities, and “the Pulpit Forum of Greensboro, a coalition of progressive clergy, to commit acts of civil disobedience.”
Word World reported:

K-Mart Labor Struggle, 1995
Calvin Miller, Greg Headon, Governor Spencer, and Deborah Compton-Holt explained how K-Mart Warehouse Center employment practices and conditions had become unbearable, causing workers to organize around questions of economic justice. Attempts at organizing had been quelled. These veteran labor organizers recounted how they mobilized their families, communities, and the Pulpit Forum of Greensboro, a coalition of progressive clergy, to commit acts of civil disobedience and bring pressure to bear on K-Mart until they negotiated in good faith for a fairer contract. In the end, the workers triumphed, although the struggle continues. Students from local colleges, both black and white, joined the K-Mart boycotts and there was massive media coverage throughout the nation.

Governor Spencer and his associates “enlisted race to resist heirarchy.”

And, maybe you noticed this from the video… Governor Spencer has a black liberation flag bumper sticker on his car.

And, that’s just what we know right now.

The real question is “Was this just a chance beating?”… Or, “Was this Governor Spencer just following orders from above?”
You’ll have to decide that for yourself.

It was on Fox and Friends