There have been so many changes to the tax code over the past decade that it is now 10 times the size of the Bible, but with none of the Good News. That factual statement usually gets a good laugh back home in Michigan. What isn’t funny is the effect that constant tinkering with taxes has had on the people who pay them, and on the economy.

According to Nina Olsen, the National Taxpayer Advocate at the IRS, Americans overall spend over six billion hours and $168 billion every year to file their returns. This is stark testimony to the complexity of the tax code. Meanwhile, owners of small businesses face tax rates as high as 44.6%, while the total (state and federal) U.S. corporate rate, 39.1%, is the highest in the industrialized world. 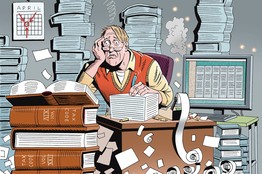 The last time the U.S. enacted a comprehensive tax reform was 1986. But many of America’s major competitors have been actively reforming their tax laws in recent years. Even our closest neighbors are getting ahead of us. Canada has already reformed its tax laws and Mexico is doing so right now. If Congress doesn’t take action, the U.S. risks falling further behind.

The tax code should make it easier for American companies to bring back profits earned overseas so they can be invested here. It should not hinder small businesses from growing into large businesses. And the individual income tax needs to be simpler, fairer and flatter for everyone.

On Wednesday, I am releasing what a simpler, fairer tax code actually looks like. The guiding principle is that everyone should play by the same rules—your tax rate should be determined by what’s fair, not by who you know in Washington. Here is what it would look like:

First, the tax code will be made simpler—so every family can do its own taxes confidently, without fearing an audit, or wondering if someone else who can afford an expensive accountant is getting a better deal.

Today there are 15 different tax breaks for education—nine for current expenses, two for past expenses and four for future expenses. The IRS instructions explaining it all come to almost 90 pages. That isn’t a tax code designed for working families; it is a tax code designed to make money for accountants.

Last year, my Democratic counterpart on the Ways and Means Committee, Sandy Levin of Michigan, and I created 11 bipartisan working groups to tackle different parts of the tax code. One of those, headed by Diane Black (R., Tenn.) and Danny Davis (D., Ill.), looked into those education provisions. After months of work, the leaders of the working group recently came forward with a plan that consolidates four of these provisions into one improved credit, making it easier for families and students to afford a college education.

Paired with more commonsense reforms like increasing the standard deduction and the child tax credit will mean that nearly 95% of the country can get the lowest possible tax rate by just filing the basic IRS 1040A form—no more itemizing, no more keeping track of all those receipts, and no more filling out all those extra schedules, forms and work sheets.

Second, the tax code will be made more effective and efficient by getting rid of special-interest handouts, which will mean lower tax rates for individuals, families and all businesses. Under this plan, over 99% of tax filers will face a top tax rate of 25%—allowing small and large businesses alike to expand operations, hire new workers and increase benefits and take home pay. On the individual side, there will be an introductory bracket of 10%.

Nonpartisan, independent economists at the congressional Joint Committee on Taxation have already analyzed this plan. According to those estimates, after this streamlining of the tax code, the size of the economy will increase by $3.4 trillion over the next decade, or roughly 20% compared with today. This will lead to nearly two million new jobs—and producing up to $700 billion in additional federal revenues that can be used to lower taxes even further or reduce the debt.

What does this mean for you and your family? Because we will have a healthier economy, wages will rise. With more income but lower tax rates, families with a median income ($51,000 for a family of four) will have on average an extra $1,300 in their pocket at the end of the year.

Third, make the tax code fairer and more accountable. That means no more hidden provisions that benefit a favored few, and no more tax increases to fuel more spending.

We can clean up provisions like “carried interest” that allow certain private-equity firms to get the investment-income tax rate on what anyone else would call normal wage income. We’ll also put an end to special depreciation benefits related to corporate jets and close, once and for all, the infamous “John Edwards” loophole that allows a select few to avoid employment taxes on their income. The revenue gained from that provision, and many others like shifting to Roth-style retirement accounts for those contributing more than $8,750 (only 5% of the workforce) can be used to lower tax rates across the board.

The tax code changes in my plan are not intended as a means of raising revenue. If loopholes are closed, Americans should get the benefit by way of lower rates.

Tax reform needs to be about strengthening the economy and making the code simpler and fairer. That’s what Republican President Ronald Reagan did when he worked with Democrats in Congress in 1986. We need to get to work and repeat that success.

Mr. Camp, a Republican, is chairman of the House Committee on Ways and Means.