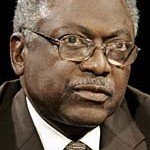 The shooting is cause for the country to rethink parameters on free speech, Clyburn said from his office, just blocks from the South Carolina Statehouse. He wants standards put in place to guarantee balanced media coverage with a reinstatement of the Fairness Doctrine, in addition to calling on elected officials and media pundits to use ‘better judgment.’

‘Free speech is as free speech does,’ he said. ‘You cannot yell ‘fire’ in a crowded theater and call it free speech and some of what I hear, and is being called free speech, is worse than that.’

Clyburn used as an example a comment made by Sharron Angle, an unsuccessful U.S. senatorial candidate in Nevada, who said the frustrated public may consider turning to ‘Second Amendment remedies’ for political disputes unless Congress changed course.

Clyburn said the man accused of shooting Giffords did just that.

‘He saw a Second Amendment remedy and that’s what occurred here and there is no way not to make that connection,’ Clyburn said.

Despite Clyburn’s position, law enforcement has not yet revealed any motives in the shooting.

Representative Clyburn, respectfully speaking, your use of free speech is giving cause for the legislation of knee jerk reactions, can we get that pushed through, too?