If there was one complaint I had when visiting people in my get out the vote efforts in this past election cycle, it was “Yes, I know there’s an election. [Candidate #1] called me last night. [Candidate #2] called me the day before. [Group X] has called me twice already. How do these people get my number?!“. I saw a number of complaints on Facebook, even! My father got great amusement at these callers expense, especially the Democrat Voter Identification Survey he took when he informed them that he was voting a straight Republican ticket for the first time in his life (he’s a registered Democrat who has voted Republican in most elections for over 30 years). Not everyone was amused as my dad, though.

Thanks to Representative Virginia Foxx, next election cycle citizens might not have to deal with being bombarded by calls from candidates and groups. Issued on her website is the following press release:

… bill to allow citizens to opt-out of political robo-calls 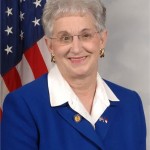 “Every campaign season, like clockwork, voters are bombarded with an endless stream of political robo-calls,” Foxx said. “There is little voters can do to stop this invasion of their homes, which often happens during dinner time or even late at night. My bill fixes this problem by allowing anyone to opt out of these calls by simply signing up for the federal government’s ‘Do Not Call’ list.”

“Americans hate it when politicians make special rules for themselves, and political robo-calls are a perfect example, Foxx said. “Citizens should be allowed to stop automated political calls from coming to them just as they can stop telemarketing calls. Closing this loophole is a matter of fairness and will help bring a much needed dose of peace and quiet to North Carolina homes during campaign season.”

Anyone who wishes to continue to receive automated political calls will still be able to receive them. Foxx’s legislation strictly applies to unsolicited, political robo-calls where a live person is not available to speak with the individual answering the phone.

Did you get bombarded with phone calls this past election cycle?