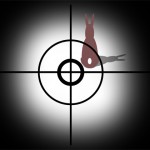 Representative Bob Brady of Pennsylvania told The Caucus he plans to introduce a bill that would ban symbols like that now-infamous campaign cross-hair map.

“You can’t threaten the president with a bull’s-eye or a cross hair,” Mr. Brady, a Democrat, said, and his measure would make it a crime to do so to a member of Congress or federal employee, as well.

Asked if he believed the map incited the gunman in Tucson, he replied, “I don’t know what’s in that nut’s head. I would rather be safe than sorry.”

He continued, “This is not a wakeup call. This is a major alarm going off. We need to be more civil with each other. We need to tone down this rhetoric.”