From the YES weekly blog:

The Rev. William Barber II, president of the NC NAACP, leads the assembly at Green Street United Methodist Church in the singing of the Civil Rights Movement anthem, “Ain’t Gonna Let Nobody Turn Me Around,” during an education forum sponsored by the Institute for Dismantling Racism in Winston-Salem on Monday night. 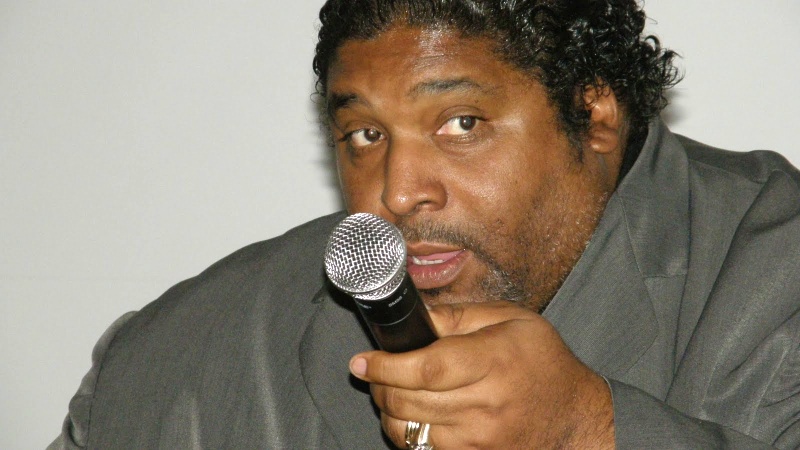 The struggles of the Civil Rights Movement served as a backdrop for the education forum hosted by Green Street United Methodist Church in Winston-Salem Monday night.

The Institute for Dismantling Racism hosted the forum entitled “Learning the Wake County Way.” Panelists included Timothy Tyson, a senior scholar at the Center for Documentary Studies at Duke University; Chuck Dulaney, a retired assistant superintendent for the Wake County school system; and the Rev. William Barber II, president of the North Carolina NAACP. As Barber stood to address the scores of attendees gathered at Green Street Methodist, he led the congregation in a rousing rendition of the Civil Rights anthem, “Ain’t Gonna Let Nobody Turn Me Around.”

Barber frequently touched on the Civil Rights struggle of the 1960s as he spoke of the actions of a coalition of citizens and clergy who oppose the Wake County Board of Education’s decision to change its student assignment policy, which is based on socioeconomic diversity. Wake County is the largest school system in the nation to base student assignment on family income.

Last fall, Wake County voters elected four Republicans to the school board, and one of the first things the new Republican majority attempted to implement was a neighborhood schools program, which would “tear asunder” the socioeconomic diversity system, Barber said. The logic of the Republican members of the Wake County school board appears to be, “If it’s working, break it,” Barber added.

Barber was one of 19 people arrested at a school board meeting in July for protesting the board’s actions in a show of civil disobedience.

Barber said what’s happening in Wake County is not a local issue or even a statewide issue, but a national issue. Willard Bass, executive director of the Institute for Dismantling Racism, agreed with Barber’s assessment. Bass said Wake County isn’t the only school system struggling with this issue. The Winston-Salem/Forsyth County Schools have had a problem with the re-segregation of its schools since the board of education implemented a school choice plan in 1997.

Barber went on to say that the “noble goals” of Wake County’s policy of socioeconomic diversity — which have led to outstanding student achievement and national acclaim — are in great peril. The school system’s income-based student assignment policy, which began in 2000, ensures that no school has more than 40 percent of its students receiving free and reduced lunch, and no more than 25 percent of its students failing to perform at grade level.

Dulaney, who served as the assistant superintendent for growth and planning, helped the county pass a $1 billion school bond referendum in 2006 to accommodate the massive rate of growth in the system. The current controversy over student assignment, busing and socioeconomic diversity boils down to three basic facts, Dulaney said.

A school system can’t achieve academic success for minority students by assigning them to schools where they are the overwhelming majority; when schools are more ethnically and economically diverse, students excel; and when new schools and old schools have similar mixes of students, it keeps the middle class invested in all schools, which leads to greater parental involvement and higher test scores, Dulaney said.

The key to sustaining economically diverse schools for the past decade has been the rapid growth of magnet schools in Wake County because when all schools are essentially alike, and some of the best schools are in economically depressed areas, it inhibits the desire for a neighborhood school assignment plan, Dulaney said.

Tyson pointed out that the NAACP has been fighting for excellence and equity in North Carolina public schools since the 1940s, and the organization’s leaders have paid a heavy price, especially when schools were desegregated in the late 1960s and early 1970s.

NC Rep. Earline Parmon said she hopes members of the Winston-Salem/Forsyth County Board of Education get the message that when you have equality and diversity in schools, all students excel. She recalled growing up as an African American in Winston-Salem and attending segregated schools, where she encountered grave injustices faced by all minority students before integration.
“I only was able to attend four hours of school when I was in first grade simply because we were little black kids and did not have enough schools in our area for us to attend,” Parmon said. “We cannot, in 2010, think about going back to that era; we absolutely cannot do that.” – POSTED BY KEITH T. BARBER ON 10/05/2010