E Pluribus Unum
At midnight of July 29, 2010, the new Arizona Immigration Law went into effect, sending many of the bill’s opposition into the streets, in protest. Though many of the main, heavy handed policies scheduled to go into effect were blocked by an Arizona judge, the opposition is not counting it a victory. It has been estimated that over 100,000 illegals and even Arizona residents have picked up and left Arizona when the legislation was introduced. It is also estimated that another 460,000 are in the process of relocating since the bill’s passage. The immigration bill has already had its desired effect in its intent:

The legislature finds that there is a compelling interest in the cooperative enforcement of federal immigration laws throughout all of Arizona. The legislature declares that the intent of this act is to make attrition through enforcement the public policy of all state and local government agencies in Arizona. The provisions of this act are intended to work together to discourage and deter the unlawful entry and presence of aliens and economic activity by persons unlawfully present in the United States.

You have heard it said that Arizona is merely, enforcing a law already in effect. This statement is correct. In Title 8 Chapter 5, Aliens and Nationality, of the U.S. Code of Federal Regulations states the limits and what is permissive for States to enforce. However, the U.S. Code only limits enforcement to apprehension and does not mention anything on deterrence. Arizona is expanding this law in lieu of a state crisis, pitted in increasing violent crime on the border and millions of dollars going to public services, used by illegals prevalently. Has the U.S. Congress had a chance to revise and/or repeal any of these codes since the introduction of the Arizona Immigration Law, to maybe, provide a stance of illegal immigration deterrence, so Arizona would not have to act alone? Yes.

In January 2010, Congress revisited the U.S. Code, according to policy; January was the same month the Arizona Immigration Law was being introduced in the Arizona Senate. Prior to this, active measures, such as immigration sweeps, were being conducted. Again, where was the Fed? Was the U.S. Code another Congress-approved piece of paper “finger drilled” without being read? I am starting to believe it is this Administration’s policy to not read anything that comes across its desk. If Congress and the President wanted to block the Arizona law, this could have been done if someone who actually cared about their job revised and/or repealed anything in Title 8. It is only the law of the land, right? If it is the law, then why is the Fed taking it to court? The lawsuit claims that Arizona has overstepped its bounds and the law could result in racial profiling. The Arizona Immigration Law says that, “A law enforcement officer, without a warrant, may arrest a person IF the officer has probable cause to believe the person has committed any public offense that makes the person removable from the U.S.” Furthermore, Subsection I of the Arizona Immigration Law says that peace officers can be held liable for civil rights violations, if they acted on bad faith. However, that is being mitigated already by Arizona law enforcement agencies, requiring all of its peace officers to undergo training in how to uphold the law without losing the public trust. The video Arizona law enforcement are required to view is at this website: http://agency.azpost.gov/video/index.html. I encourage you all to, not only view this video, but read the U.S. Code of Regulations on Aliens and Nationality and the Immigration and Nationality Act, if you desire to affirm your belief in this new law.

Now that we know that Arizona is in full compliance with Federal law (more so than the Fed), how much are the illegal immigrants costing Arizona in public services meant for legal residents? Check out the charts below, to see how much Arizona would be saving, according to azcentral.com: 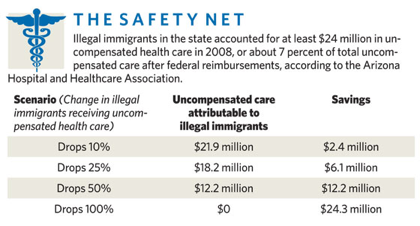 With the U.S. already hard on economic times, Arizona could use the savings in health care and education, depicted above.

On July 28, 2010, Judge Bolton blocked many of the effective measures implementing the state law. These are the provisions blocked and the reasons why, provided by foxnews.com:

2. Failure to carry immigration papers: Creating a crime for the failure to apply for or carry alien registration         papers.

Reasoning: Pre-empted as an impermissible attempt to create its own state immigration scheme by altering   the penalties established by Congress under the federal registration scheme.

3. Illegal for an illegal to solicit work: Creating a crime for an unauthorized alien to solicit, apply for or perform work.

Reasoning: Pre-empted because there is a comprehensive federal scheme regulating employment of illegal immigrants.

Reasoning: Pre-empted because determining whether a specific offense makes an alien removable is a tough decision and there is “a substantial likelihood that officers will wrongfully arrest legal resident aliens,” thus impermissibly burdening legal aliens (and only the federal government can impose such burdens)

To personalize this new law for every one of us, let us look at our daily life: How many times do we have to show identification to get what we want? When we go to the movie theater, Sam’s Club, purchase alcohol or a fire arm, and even when we get pulled over by police. It is apart of being a citizen here in the United States. If you are in full compliance with the law, then there should be no problem with cooperating with law enforcement. My wife is an immigrant and she carries her required documentation everywhere she goes, because that is what she is supposed to do! Is the Fed saying that I could have transported my wife to Mexico and entered the U.S. illegally, without repercussions? Man that would have saved me over $1500 and six inches of paper work, if I knew the Fed was that permissive on immigration.

The Juice is Worth the Squeeze

I would have never have chose that route anyway. I am proud to be an American. I want my wife to feel the same way about this country as I do; that the pain is worth the reward; to realize that nothing is handed to you and you work for who and what you care about; and to be called “American,” knowing that centuries of struggles and prosperity have made that title an honor to bear.

By Christopher Corbett
Christopher is a devoted husband and father of a three year old son with a daughter on the way. He is 27 years old and currently serving in the United States Army as a Chaplain Assistant, and have been serving since August 2001.
THANK YOU, Christopher, for your dedication to our country!